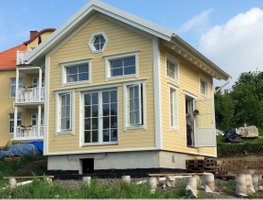 Like most northern European countries, Sweden has a large demand for affordable residential accommodation which the market is struggling to provide.

In late 2013 investigations were underway to find solutions to encourage sites with an existing family house to build additional accommodation within their boundaries which could potentially create an additional 150,000-200,000 new micro-homes, which could be used a primary residence.

The legislation was finally passed in July 2014 that allowed the creation of the Attefallshus micro-house (named after the Housing Minister, Stefan Attefall), which means planning permission is not required for this new build property if it meets a number of criteria:

• It cannot be built within 4.5m (15ft) of a neighbouring site without the neighbour’s permission.

• Specific sites, for example near railways lines, water, near listed buildings, environmentally sensitive areas or near military or aviation sites would not be included and would need to apply for planning permission as normal and to satisfy other regulations.

• It must comply with building regulations.

In practical terms, the Attefallhus has been very successful and many people have been using them as a complimentary house (“komplementbostadshus” in Swedish). At the most basic level they can be a glorified garden shed with windows which can be used as a summer house, and perhaps a seasonal guest space.

More commonly, they are fully fitted micro-house with insulation, electricity and running water, being used as offices, single/couple permanent houses for young adults who cannot afford their own places, or even a “granny pod”. With an ever aging population, care of the elderly can be provided close to the family home but within a private and personal space.

fourLINK have been providing accommodation construction consulting with clients and suppliersof Atterfallshus as the entire micro-house concept is an important solution to the ever increasing problem of housing shortages and rising cost. In many parts of the world like Japan, space and cost mean micro-houses have become something of an art form; minimal living in very small but perfectly detailed properties.

In the West there is also an ever growing demand for smaller and affordable properties. “Generation Rent” is the term given to the young people in London who may never afford to own a property given the high costs. The tiny house movement is a group of people in American and Australia who don’t want or simply cannot afford a large mortgage, and have embraced the concept of living small and simple. While some of the properties are built on trailers and can be easily moved, the permanent micro-house as a single person dwelling has become a powerful symbol that houses do not need to be large, expensive, or excessive in terms of energy use.

One thing is certain: the future of housing will remain an important topic throughout the world, as prices and lifespan increase, and urbanisation continues to put pressure on urban accommodation demand.