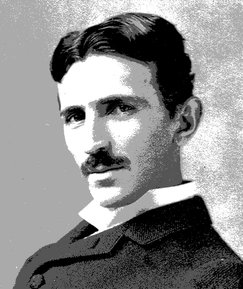 Popular culture attached the adjective “mad” scientist to his name, as often happens with people who are advanced in their thinking which is beyond that of the common person. Obsessed with pigeons, flying and the number 3, this visionary changed the world. Born into a Serbian family in a small village called Smiljan – which was during his time part of Austro-Hungarian Empire, now in Croatia – where there is a memorial museum in honour of their most famous resident. (http://www.mcnikolatesla.hr/)

There remains a hotly debated discussion between Croats and Serbs to who “owns” Tesla. But in reality, Tesla belongs to the world. His great mind was also dreaming large – what we know nowadays as wireless connectivity, Tesla “saw” as a possibility back in 1909.

The 160th birthday of Nikola Tesla was a largely unnoticed event, even though we should be thankful to him every day when we use electricity –  even now we are taking advantage of his vision as we read this blog. Of course, he was not the only inventor at the time with his ideas but certainly one of the greatest. Run by a vision of a new world, he dreamed about visiting Niagara Falls from the small creek in the middle of nowhere where he lived, and he ultimately found his way to the big world. Tesla wasn’t interested in money, just success. He died in a small hotel room in New York.

What inspires us with Tesla today was more his philosophically thinking; the birth of great ideas that then became patents and in the end, have purpose in making everyday life easier. Perhaps that is why the Tesla name itself has now become an innovative technology company led by Elon Musk.  Diversity of life gives us a diversity of possibilities in thinking innovation. In business language “innovation” is a very common buzzword, that is now used so easily and often to sound smart. There are so many phrases that combine innovation, that in the end we had to understand the management of innovation.

Just to think about a birth of an idea, which can be named as innovation, pulls us into a greater philosophical deliberation. Can we force innovation? Do we think in a way to find the answers which we are lacking in our life at the moment? What is innovation? Type the term into Google – itself an innovative tool which changed the world – to search for results. Google gives us thousands of possibilities. One is “Turning an idea into a solution that adds value from a customer’s perspective.”

We define the innovation process as a great idea, executed brilliantly, and communicated in a way that is both intuitive and which fully celebrates the magic of the initial concept. We need all of these parts to succeed. Innovative ideas can be big or small, but the breakthrough or disruptive innovation is something that either creates a new category, or changes an existing one dramatically, and often destroying the existing market leader if they cannot adapt. An existing idea of a company can become obsolete very quickly. Innovation can either create a new market, or radically change an existing one.

An innovation is a feasible relevant offering such as a product, service, process or experience with a viable business model that is perceived as new and is adopted by customers.

It is not an easy answer: innovation needs to be defined and agreed upon in each organisation, making sure it is strategically aligned with all stakeholders. Without it, misalignment results in less than optimal focus and results. As long as it includes “new” and it addresses customer needs and wants, any variation goes.

The pragmatic life which we are living doesn’t give us much space for in-depth thinking. Everything is moving fast and the reality is that, for instance, new apps are growing and spreading in a way we can’t follow. That is all modern life solutions which are addressed to the same people that Tesla was thinking of. We say “same people” with a reason; needs are basically the same so we doubt that there is a much difference to fulfil the needs in leisure by listening to the piano, painting or scrolling on Instagram or Facebook.

It is the same in business – in the end, the client must believe that you are the right company for the assignment, and the innovation that your company shows is the creativity that it has.