From Food Waste to Green Buses – The Sustainable City 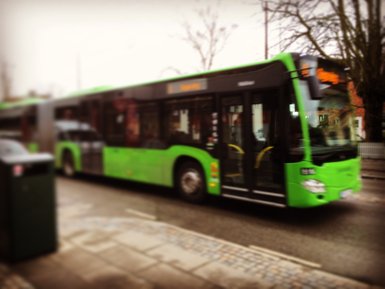 A quiet revolution has been taking place in Sweden where fossil fuel use has been almost entirely phased out of public transport and city owned vehicles.

To the average Swede this revolution is nothing new, but to the outside world it is an impressive commitment of how a city can cut fossil fuel use from its’ transport needs.

In Malmö, the third largest city in Sweden with almost 300,000 people, the 200 city buses have been powered by gas since the 1980’s, as a first step in reducing harmful diesel emissions within the city air. By 2012 fossil fuel natural gas was itself being phased out and replaced by locally produced biogas with nearly two-thirds of the buses running on sustainable fuels.

Now, at the beginning of 2016, the natural replacement cycle of old vehicles means that new buses have joined the 200 strong fleet with all vehicles running on 100% biogas fuel.

In comparison, many other cities, such as Edinburgh in Scotland, are investing in diesel hybrid bus technology, which uses fossil fuel in a diesel-electric parallel. While more efficient than standard diesel technology, it is still burning fossil fuel.

While Malmö has the demand for biogas, it has also been putting in place key steps within the supply chain to become self-sufficient in producing biogas.

The citizens of the City are the key to producing biogas. Every household and business in the city is responsible for the mandatory sorting of food waste into special paper bags which are collected in separate bins alongside other waste.

Through the anaerobic digestion process the organic waste produces a mixture of both methane and carbon dioxide and serves as a high-energy renewable fuel. This is then processed and is suitable for the buses, official city cars and rubbish trucks, with the remaining sludge waste being sent to farmland as a fertiliser. Not only does the whole process become self-sufficient, there is also substantially less waste being sent to landfill.

There is now also an increased interest from the private sector including individuals and corporations for cars to run on biogas. A range of 600kilometers on a biogas filled tank is now possible for an average car.

The city also operates electric vehicles for maintenance and encourages bicycle use where possible through the 490km of cycle paths and bike-priority traffic lights at 28 intersections.

The sustainable city is starting to become a reality.